Liner Notes from 1995's Under Cover of Darkness Album 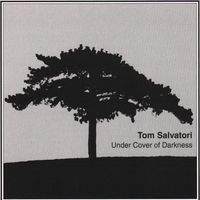 It was August 10, 1994, and I spent the evening alone. With my family safely tucked away at Eagle River, I tinkered with a bottle of Amaretto Di Saronno and what has now become the core of this recording.

As one of the litany of resolutions that ensued, my family decided that I will no longer be left alone for an extended period of time regardless of circumstance.

A Word About My Guitar Playing

I play the nylon string guitar with a strong emphasis on play. Being self-taught, I never thought that the terms “discipline” or “study” should necessarily apply to playing the guitar. I also never aspired to fit the mold of the pretentious player-artiste; whose overbearing focus on form seems to produce little more than stale interpretations of the works of the Masters in measured calisthenics. This show of virtuosity always appeared far too institutional for my taste.

The nylon string guitar is intensely personal to me. So much so, rarely do I either perform or record. But I do live it. The “pieces” I have composed for this recording are really nothing more than just basic ideas…as threadbare as the often after-midnight environment whence they were drawn. Actually, their minimalist stylings reflect a direct correlation to the fact that I only play the guitar to relax…and playing normally takes place while I’m laying on my back watching the ceiling fan circle above my bed. I truly doubt that my ideas, style, or prone playing position will ever be featured in the haute pages of Guitar Review…

A Word About the Recording

Contrary to public opinion and the news reports, I did not at all plan the thunderstorm that took place late that August evening. Rather, it was initially cursed as it hampered my ability to perform and record until I submitted to its incessant desire to become part of my night. Although my neighbors have grown accustomed to some of my quirks and eccentricities, I am fairly certain they were seriously confused about the microphones that were hanging out the bay windows that evening.

Please excuse my excessive indulgence in weaving the storm into this recording. Simply stated, I’m not one to tamper with divine inspiration…on the upshot, it made Mike’s job easier in production as it conveniently masked the tape hiss. Hooray for analog equipment!

A Word About Why

I have been told over the years that my musical style and ideas fringe the borders of Dark and Disturbing. I like to think of them purely as a by-product of my quiet time. And, when I am alone, I guess I would rather be extending the boundaries of after-hour off-rhythm dissonance than deadheading a TV show.

My hope is that the music presented here helps to create a quiet and relaxing environment…for you to be alone and escape your world for a short while.

After all, that’s what it’s all about for me. Quietly enjoy.