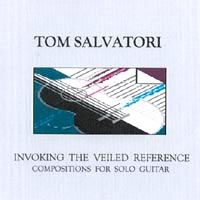 A Road Map Through the Veiled References:

In this piece, a tip of the hat goes to Nick Drake’s Fruit Tree and Jim Croce’s Time in a Bottle.  More than likely, their influence is manifest through the descending bass line theme that is present throughout the piece.

This lullaby was composed as a dedication to a dear friend’s little girl, Michelle Carlson, who was born with a disabling disease called Rett Syndrome.  I’ve been told that my music soothes her; which is a compliment that touches me deeply and makes this piece very special to dedicate.

Here’s a piece that carries a little bit of fingerpicking speed along with it.  More than anything, it seems that the alternating bass notes are reminiscent of a Steve Hackett styling.

This one speaks to me as a musical expression of what it would be like to be lost at sea.  The rhythm seems to reflect the ebb and flow of the waves.  The tempo changes represent the recall of better times, but fate takes over and deals the last card down to an unresolved ending.

The not-so-veiled reference to O Come All Ye Faithful is intended.  So is the resolve at the end.

Had I written the soundtrack to The Wizard of Oz, I might have used this piece during the house-spinning-in-the-tornado scene.

Here’s a piece that just feels cool to play.  Nothing more or less, it just feels good to play it on the guitar.

Walking Downhill was composed from a stylistic perspective that wouldn’t make Mark Kozelek of the Red House Painters too uncomfortable.

Chris DeBurgh fans may sense a melodic sprinkling of A Spaceman Came Traveling in this one. Additionally, I’ve plucked my most obvious note of reference to close the composition…a thumb over the neck tribute to no one other than Mr. Steve Howe.

Peter Gabriel, in his obscure soundtrack Passion, composed the most beautifully lingering melody ever written in the history of mankind in a piece called With This Love.  Seeking Resolve comes in along the same lines sans the superlative.

Don’t think I’m leaning toward the footlights of Broadway here, but something about this one reminds me of Joseph’s Close Every Door.

Question: What does every composer own, yet not claim to possess?

Answer:  A personal favorite. This is it for me!

Composed in yet another loosely defined Hackett styling, The Carousel conjures up a visual of kids playing in the park…rushing for position on a carousel that Dad spins around slowly at first…then picks up speed…hits fever pitch…and slows down all too soon to the disappointment of the kids’ dazed and dizzied perspective.

Had I written the soundtrack to Falling Down, this is the music that would have been playing when Bill Foster finally cracked.

This is a playful composition that calls to mind the coffee table game Labyrinth, where all the concentration you can muster may not be enough to guide a marble through a maze of holes.  I’ve positioned the “C” bass note at spots in the piece to represent the sound of the marble falling through one of those blasted holes.

This piece was composed as a trap, a continuous repeat anchored by an “A” harmonic. There’s no escape from the structure of this composition…which in itself offers reason enough to bring this album to closure.

All pieces composed, arranged and performed by Tom Salvatori.

Thanks to Mike and Perry for their encouragement.  Thanks also to my wife Ellen and my boys, Joey, Nino, and Louis for their support and enthusiasm through this project.

A Word about My Composing:

Musically speaking, over the years it seems that nearly everything I play on my guitar reminds me of something that I’ve heard before.  Not that this phenomenon has stopped me from being open to new melodies and ideas when I’m playing; in fact, I enjoy listening to my new ideas develop and then find it amusing to determine their influences.  Not surprisingly, the artists  I am enthusiastic about seem to formulate my “frame of reference.”  You may listen to my music and have a completely different opinion of its influence.  And, as long as it’s not 19th Century Opera or Country  music, I’ll be open minded to your opinion.

Most composers never cite their influences because they want everyone to believe they are the creative center of the music world.  But, since I’m so damn comfortable with my musical lot in life, I don’t have a problem at all with sharing the nods.  You will note that I’ve freely unveiled the veiled references by providing commentary directed toward the development of each composition.  I hope these notes help you to visualize what I see when I play the pieces…I also hope they introduce you to some good music to enjoy down the road.  After all, I’d like  to think that if the music influenced me, it passed a test of sorts.

It is my guess that, more than likely, the notes, melodies, and chord structures presented here already exist in one form or another in the historical expanse of music.  The artistic difference comes in the styling that is brought to the notes and melodies…timing, phrasing and expressiveness are all components that differentiate style.  Mine happen to be called Tom-isms.  I learned this from my brother, Mike.

A Word about My Musical Style:

From the rough takes through the final production of Invoking the Veiled Reference, I bantered back and forth with Mike about whether or not I have a guitar style.  This has   been  a big question in my mind since we produced Under Cover of Darkness; because that CD represented the first time my music hit the light of day in any facet of its existence.  It was during a rough audition of my new music that I finally cornered Mike with the question “Do I have a style?”

Mike initially responded with a safe, generic, and somewhat patronizing “Why of course, Tom, everyone has a style.”  Deep down, Mike knows that a comment like that will be challenged. I dug in my heels as follows:

MIKE:      Well, it’s hard to define.  You have a style that’s different from everyone else.

MIKE:      Different as in different. Steve Howe and Steve Hackett both play guitar, but I’d say that Howe has a much different style than Hackett, right?

MIKE:      No, not at all.  Look at it this way…If I turn on the radio and one of your songs is playing, I’d immediately know it’s you.

MIKE:      No, really.  Your style is different…but you definitely have a style.

MIKE:      I dunno.  I suppose it’s just safest to say that your music is full of Tom-isms.

TOM:       Great…just great…flat-out super.  Thanks for your help.  Clear as a bell. Thanks again.  Really.