“...a summit of Tom’s ability to create tenderness out of ether and let this handiwork illuminate the world’s existence. As exquisite as it gets, “Seven Guitar Miniatures” are nigh on breathtaking.” - Dmitry Epstein

“If {Late Night Guitar} catches you at the right time, I guarantee you’ll have a moment(s) where a tear will well, without you being able to do anything about it.” - Tim Panting, Reviews Editor

“What Respite Guitar has on offer is no less magical when presented as seven concise tracks than it is as one full length suite. Dreamy and beautiful, beginning to end.” - Peter Thelen 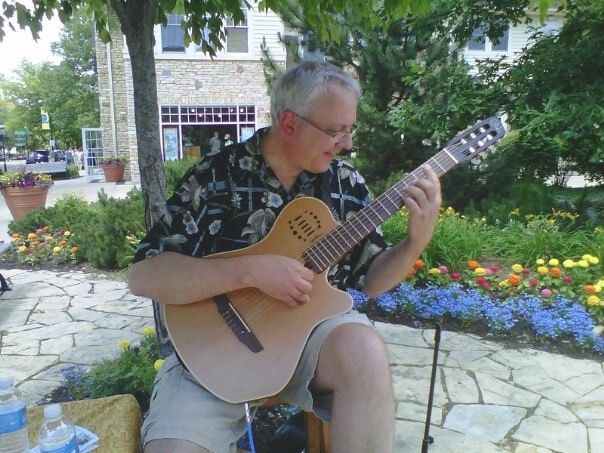 Read a recent review and full interview about Respite Guitar and Tom Salvatori in e-zine mwe3.com

Read a recent article about our company in VoyageChicago.com

Tom Salvatori composes a deeply personal and intimate style of instrumental Nylon String Guitar music, which is intentionally quiet and soothing and helps people relax at the end of the day. Adults and children both listen during their quiet time or while they fall asleep at night. Most of Salvatori's music comes out sounding like quiet lullabies; probably because his favorite time to play and to compose is during the late night!

Tom was a First Place Winner of the Illinois Music Association Senior Open in 1973 in the Classical Guitar competition at the age of 15 under the direction of his high school music teacher, Duane Tutaj. Salvatori exhibited a mature strength in restraint in his performance of the Villa Lobos set piece, Prelude #3. Tom continued Classical Guitar studies while in college (Marquette University) with Ray Mueller, head of the Milwaukee Classical Guitar Society.

Since college, Tom has chosen a musical path of composing his own uniquely styled works for the contemporary Nylon String Guitar rather than one of stage performance and the study of the works of the Masters.

Published by Les Productions D’Oz (CANADA), Salvatori hopes to share his sheet music books of Guitar solos with classical guitarists after they come home from playing their concerts: “I don’t aim to compete with the masters and their virtuoso efforts from the concert stage. Rather, I’d love for my work to be thought of as a resource for quiet enjoyment...a respite at the end of a busy day. I would be most fulfilled if my compositions could be enjoyed with other players at home, when they decide to reach for just the right music to help them relax.”

Salvatori's albums are currently released independently through Salvatori Productions, Inc. record label. Over a dozen albums, EPs, and singles are available (see Albums/CDs tab). Downloads are available through, iTunes.com and Amazon.com. Salvatori’s music can also be streamed on Pandora Radio, Spotify, Google Play and Apple Radio internet radio among others.

Both Late Night Guitar and When Evening Falls made their debut at #2 on the NAR Top 100 Radio Play Charts, with each continuing to hold top radio play honors through the end of their release years. Late Night Guitar was named Winner of a 2002 Children's Music Web Award in the Classic Recording for Children category. When Evening Falls was named Winner of the 2007 NAR Lifestyle Music Award as Best Neo-Classical Album of 2007 and was featured in several Top 10-Best of 2007 lists of prominent music reviewers in the contemporary instrumental music category.