THE WAY BACK STORY: I was awakened that night…startled to see that my classical guitar had become possessed by…ALICE COOPER!

Imagine my surprise. Just after paying homage to my favorite guitar heroes on my recently released “Parlour Favorites (2016)” album…and just as I was arriving at the pinnacle of peace and tranquility as a composer - I was startled awake from a deep sleep that late November night in 2016 to the faint cries of “I gotta get outta here” coming from across the room.

I arose from my slumber, rubbed my eyes, and in the darkness slowly tiptoed closer to my guitar to see exactly what was causing the ruckus. At the same time, ironically, I was recalling a dream I was just having about another music hero in my past that I had failed to acknowledge...

As I leaned down, the cries of “I gotta get outta here” intensified to screams and that’s when I first saw Alice Cooper emerging from between the strings of my guitar. I had enough presence of mind to grab my cellphone from the bedside table to capture the one single, solitary picture I was able to snap off with my smartphone before it was (horrifyingly!) fully drained of its charge by one long penetrating stare-down by Alice himself! It’s a good thing I got the picture, or no one would ever believe this story! 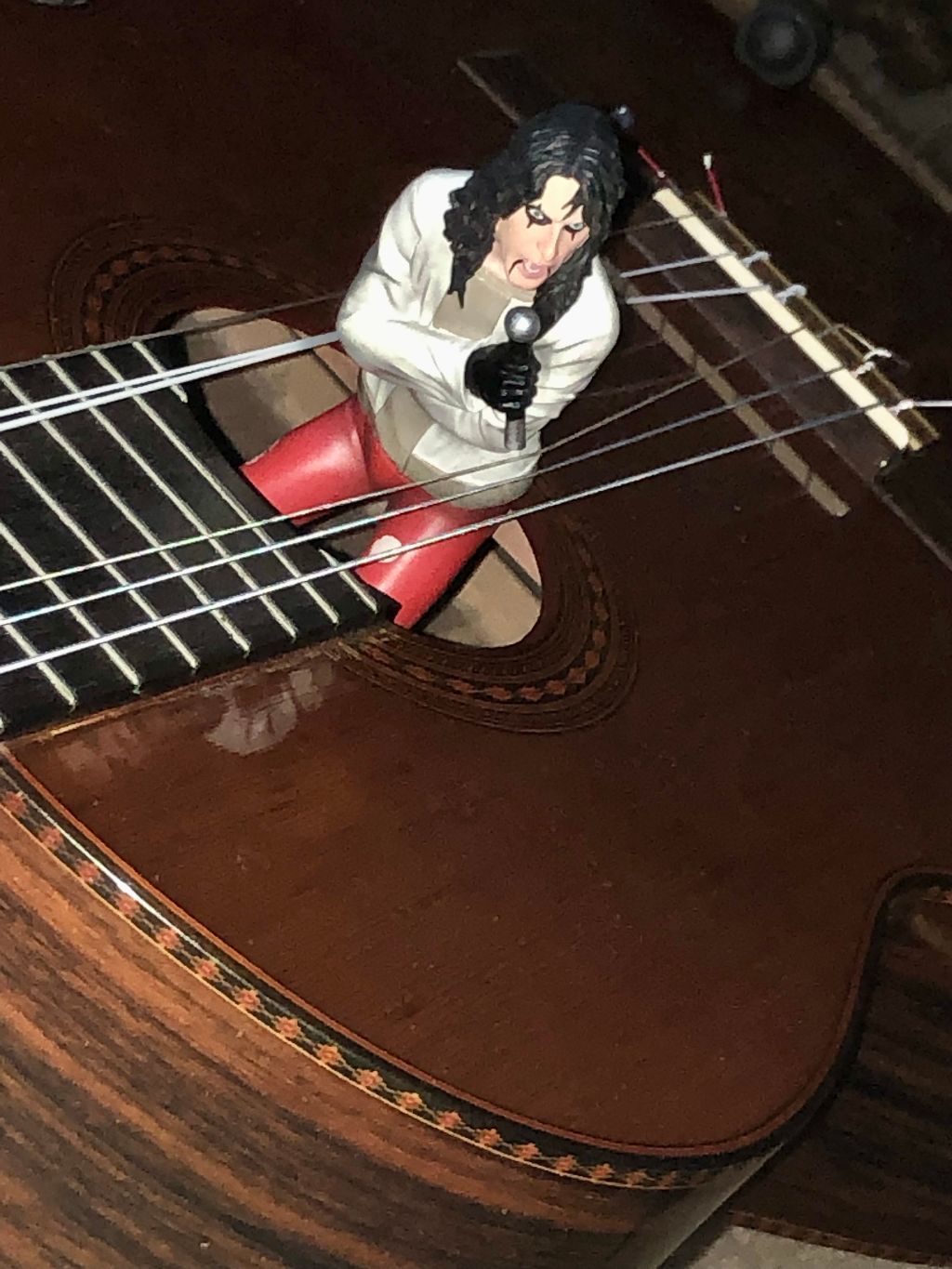 Little did I know that this encounter of the spiritual possession kind was just the start of loyal servitude to Alice as my new master. I was immediately transported into an hypnotic state and directed by Alice to interpret all aspects of nearly an entire side of his 1971 ‘Love it to Death’ album for classical guitar - and - of course I complied - not only did he feel slighted by being left off my “Parlour Favorites” album, but he brought real game. Seriously, he was brandishing a whip…a boa constrictor…a noose…and he made it known to me in no uncertain terms that he had access to gallows - and even a guillotine - and wasn’t afraid to use them…in front of a crowd, no less!

I focused on being a dutiful foot soldier to master Alice, slowly pouring over every note in every groove of Side 2 of the ‘Love it to Death’ LP. It felt oddly comforting, familiar…and deeply satisfying; yet strangely existential…after all - Alice Cooper was on the list of things my older brother Mike shared with me that I somehow repressed because I was probably younger than I should have been when I become a fan. I remember Mike attending a concert in 1971 that my parents wouldn’t let me attend. It was an outdoor show at our YMCA ice arena in Elmhurst, Illinois in the summertime, so the ice was gone, and a stage was erected for – Alice Cooper. The band had just released “Love it to Death” and I was in the ‘way back’ of the family station wagon when my mom drove there to pick up Mike. We arrived a few minutes before the show ended, so through the back window I was able to observe Alice being dragged out in a straitjacket as the “Ballad of Dwight Fry” was ending. He was then thrown into the back of a hearse to end the concert! It left an indelible impression upon me as a youngster. Did our eyes meet? Can I claim a shaman's soul entered my body?

Well, Alice certainly now showed up to personally unlock my filtered memories - I'd even say with a vengeance; not unlike the battery-powered reach-out-and-rake-in-some-coins haunted skeleton hand bank I also got from my Mike as a kid, which perhaps was responsible for my aversion to saving money throughout life, but that is another story.

It took its toll: 58 days (I could’ve been gone for more) and 45 recorded takes of immersion into the depths of: insanity, finger picking, strumming, percussive tapping and drumming on the soundboard of my guitar...under Alice's control all the while.

And thank goodness after all the toil, trouble, and straitjacketed musical servitude to master Alice, I mustered just barely enough strength to conjure the spirit of Jim Morrison’s shaman (met at a desolate roadside accident in New Mexico) to professionally engage in an exorcism of Alice Cooper from my classical guitar. It wasn’t pretty. Technically, Alice doesn’t look very good in or around a G-string, so it was a good riddance, indeed.

It was when I awoke from the hypnotic state that I realized what I had in front of me…a fully realized “Ballad of Dwight Fry Suite: Second Coming / The Ballad of Dwight Fry / Sun Arise” that was just begging to be released into the world on classical guitar. So, I released it…an EP produced from deep within the great mystery of spirit possession, obsession, and shaman exorcism that now exists as a 13-minute Classical Guitar Suite; to which the world responded with a collective “Why, Tom, Why?”

To this day I worry that my straitjacket is being made...