Did I or did I not play Carnegie Hall? That is the question 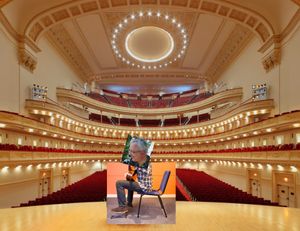 Guys in the studio sometimes disagree, or agree to disagree just to stir the pot...play a joke...start a rumor...whatever...just to get under each other’s skin once in a while. I suppose the same thing happens in the military, in the locker room with sports teams, and no one winds up being the worse for wear. Sometimes it’s actually quite devilish and fun when we turn into such Little Rascals...perhaps it’s a safety valve when we are cooped up together for long periods of time. The banter certainly is an exercise to get the blood flowing...to release a little tension...but sometimes topics can get pushed, contorted and exaggerated well beyond any normal logical conclusion. Case in point...

EXHIBIT A: and I quote...THE LINER NOTES FROM MY ‘LATE NIGHT GUITAR’ ALBUM RELEASE:

The highest honor ever bestowed upon me as a musician had nothing to do with the footlights at Carnegie Hall, celebrity status or glowing reviews in the papers. It came quietly, almost unnoticeably, from a darkened room across the hallway one night. It was from the little voice of a child. . ."Dad, can you come in here and play your guitar? Begrudgingly, and almost heeding the ‘you'll only keep him up’ advice from my wife, I walked across the hall, sat on the edge of the bed and played some of my quieter compositions. After wiggling a little foot and getting no response, I left the room. I didn't understand it right away, but after countless nights of serenading my little ones to sleep, I realized that I had received the ultimate gift of validation for my music...a child's approval!

One might argue that these liner notes are quite fine; written innocently through the lens of humility, peace and harmony...and capable of standing the test of time in lock step with the music that was beautifully produced at the time.

But then, on the other hand...one might argue that the generalization of music career milestones I referenced in a somewhat off-handed way were... true? fictitious? an outright lie? an egregious self-aggrandizing moment?

Which would somehow imply that I DID perform at Carnegie Hall?!? I suppose at this point I’ll ask you to go back and re-read the paragraph again and - - feel free to weigh in on your determination as to which side of the argument you agree with...

It winds up that banter over months (and years) of hanging out in the studio with crazy cats like a brilliant arranger/producer Michael Salvatori and a creative/storyteller/writer extraordinaire Matt Soell (there...I named names...) one thing led to another and arguments turned into sublime exaggerated scenarios...and capers were pulled.

And then all of a sudden a ‘bootleg tape’ of my elusive Carnegie Hall performance was somehow unearthed and released...which then led to a supply of ROAD CREW T-Shirts being handed out to, well...apparently my minions...honoring the date of the performance - appropriately as the 12th (of never!).

Linguists...please weigh in! Did I perform at Carnegie Hall or just off-handedly reference a generic music industry milestone?